Mirrorless cameras may well be the future of photography, and the Fuji X-Pro 2 is a step in the right direction.

One of the most interesting and probably one of the biggest revolutions in the camera world, the Mirrorless cameras were introduced quite a few years back. What rendered them different was their ability to capture and deliver great quality images in yet smaller and lighter package. Till as early as two years ago, mirrorless cameras were still seen as toys by the professional photography community – but over time, more and more pros have started swearing by mirrorless bodies and have even gone so far as to leave the full DSLR kit in the studio in favour of a mirrorless kit for wedding, travel and other professional assignments.

So when Fuji called me and offered to send over the new X-Pro2 to the office, I was really excited to see what I could do with it. I knew that the Sony A7 platform was really good (we already use them for video) – and was looking forward to put the Fuji X-Pro2 through its paces to see how it would perform during a still photo shoot.

In a mirrorless camera, light passes through the lens and right onto the image sensor, which captures a preview of the image to display on the rear screen. It is called mirrorless because it does not use a mechanical mirror to switch the scene between the optical viewfinder and image sensor.

What is the Fuji X-Pro2?

Fuji’s new upheaval, Fuji X-Pro2 is a little lightweight mirrorless camera at a relatively affordable price point that promises to deliver pictures with an amazing quality. It is an upgraded version of Fuji X-Pro1 that was introduced in 2012. 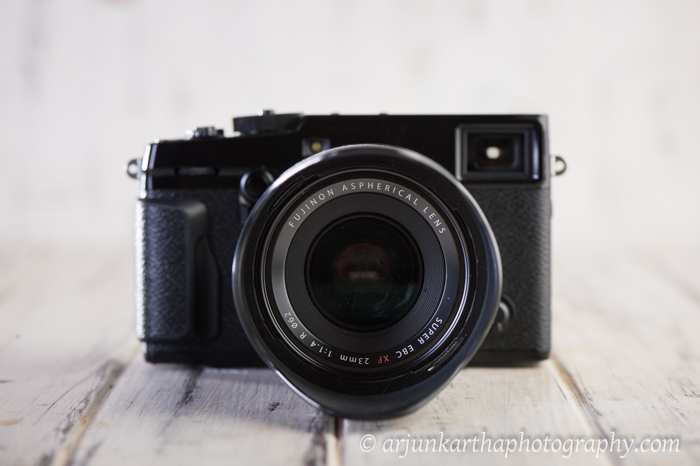 EVF – The biggest selling point for the Fuji X-Pro2 (to me) is its viewfinder. Fujifilm has added a tiny secondary Electronic Viewfinder, EVF to the bottom-right corner, letting you confirm accurate framing, focus, and exposure from within the OVF. The OVF itself is quite useless, and I had set the camera to show me the EVF every time I held it up. Being able to preview what I was going to shoot in the EVF (especially when you’re used to DSLRs) is really quite magical. There’s really no way for me to describe it in words – electronic viewfinders when done right are awesome, and are much needed. True, the purist will still prefer the old school SLR based viewfinder – but when you’re on assignment, everything that helps you nail the right shot at the right time is a step in the right direction. 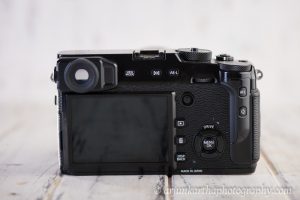 Striking Dynamic Range – I love shooting against the light (you know I do!). Pointing the Fuji towards the sun had me really amazed – there was a lot of detail in the shadows while keeping the highlights in check – a few tweaks to the RAW file gave me images I was quite pleased with. There’s a lot this tiny little camera can do! Improved Shutter, ISO and other technicalities – The Fuji X-Pro2’s shutter has been improved and can now shoot as fast as 1/8000 sec, with flash sync extended to 1/250 sec of a second. The resolution has been bumped from 16 to 24 megapixels and maximum ISO from 6400 to 12800. 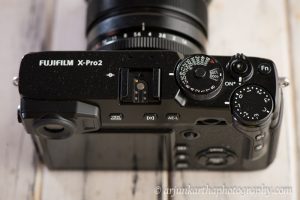 Hybrid AF system – Fuji X-Pro2 uses a combination of contrast focus detect (CDAF) and phase detection focusing (PDAF). It decides what and when to use. (Technical mumbo jumbo that basically means that you can nail focus, even in very low light).

Electronic shutter – The camera has an added benefit of using electronic shutter. Moreover when in the electronic mode, the shutter completely goes off silently. VERY useful when you don’t want your subject to know you’re taking pictures!

Add-ons – Fuji X-Pro2 has pretty interesting face detection modes. Besides recognizing faces, it can detect eyes and you can even choose whether to prefer closer or farther eye when focusing. Frankly I haven’t really tried this much – I’m old school that way). You can even simulate a range of film types – right in the camera.

Hands on review – and a little about the shoot

Prateek and Sandy from the US were getting married a little later on, and wanted a short session in the city they were originally from – Delhi! When we spoke to them, we knew we wanted to incorporate elements that were uniquely Delhi in their session and what better place to do this than India Gate! We had a lovely time with them (they are SO good with the camera!) and this was also the perfect opportunity to put the new Fuji through its paces. Dynamic range – This was something I really wanted to know more about – and I wasn’t disappointed. The colours were rich and vibrant (even in RAW) and I only needed to do some basic corrections in post production. EVF – I really enjoyed the convenience of EVF. Through an EVF what you see is what you get. I could use the secondary display to see the whole frame, rather than just a zoomed-in view of your focus point. Touch and feel and ergonomics – Ergonomics are great. It still has the all-metal construction but more attention has been given to provide environmental sealing. Due to its lightweight body and smaller size, it feels more like a toy but due to its solid body I felt like holding a machine in the hand which gave me a good feeling. The camera is quite handy which is a treat specifically for a wedding photographer like me. Most of the buttons I would say are in the right places. As for an example, you can easily operate the on/off button with your shutter finger as opposed to Canon where the button is placed on the other hand of the camera. The zippy focus stick or the joystick is a gift. It can be set for direct and accurate AF point selection and enables direct access to some of the important functions like metering mode or auto ISO settings. However, it does get a little getting used to. I have rather large hands (!) – and I would end up pressing the wrong buttons every now and then. I chalk this up to getting used to the ergonomics though – you can’t really have it both ways. 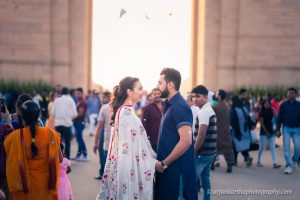 Low-light performance – Low light is something I was particularly keen to explore with the mirrorless system. After all, as a wedding photographer – we are called upon to shoot in a variety of lighting conditions, including times when there is very little ambient light. If mirrorless cameras are to one day replace SLRs, low light performance is where they needed to shine. Off the cuff, I wasn’t expecting much – after all, SLR sensors are famed for their exemplarily performance in low light.

I took the Fuji-Xpro2 to a wedding in Goa, and while it was in my bag for most of the time – I did pull it out when the wedding party was on the dance floor. The ambient light was fairly mixed, with the DJ and dance floor lights all over the place. Without a fill flash, I needed to depend on the camera to be able to walk away with usable shots. The Fuji X-Pro2 performed really well – and much better than I had expected. Shooting against the strong ambient light on the dance floor, the dynamic range on the Fuji was able to pull exceptional details from the shadows – making the photos extremely usable, even without using flash. 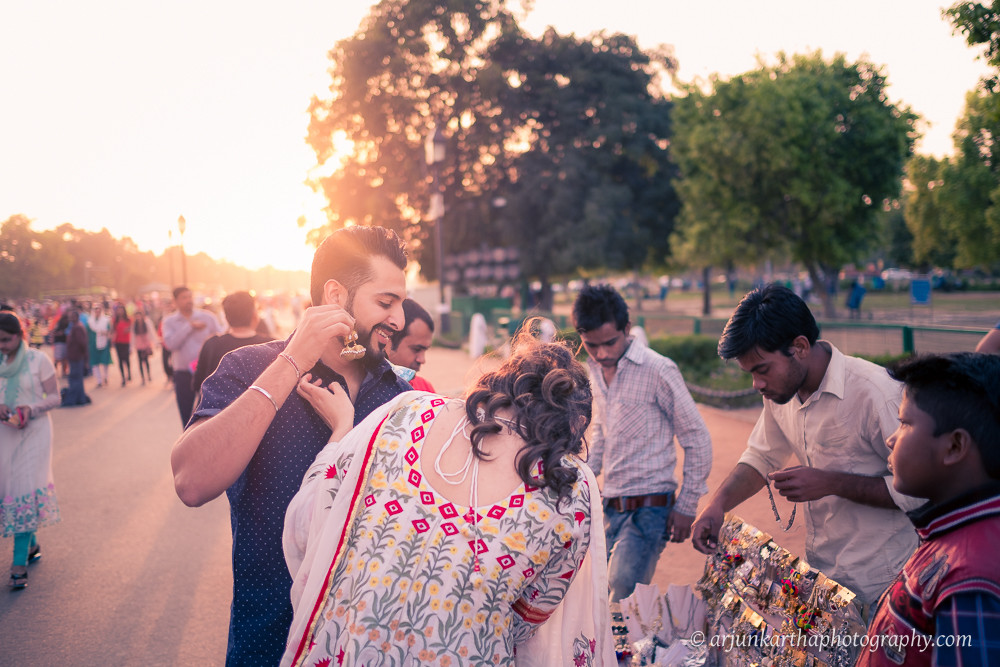 Things that could work better

ISO ring – For bigger shifts of ISO you really need to lift and turn and lift and turn a few times which is a little time consuming and can be irritating at times. Moreover, ISO dial is integrated in the exposure dial and to set it you need to lift it up and turn. I was a little concerned that I may break the ring (luckily I didn’t!).

Battery life – The camera eats up battery more quickly. So you definitely need to carry extra batteries in order to save yourselves the trouble and it’s better to turn the camera off when not on shooting mode as it helps in saving the battery a bit. It also helps to turn off the EVF (or set it in the mode that auto activates it when you hold it to your face).

Tilt Screen – Fuji X-Pro2 does not have a tilting screen. I personally missed this particular feature a lot while working. 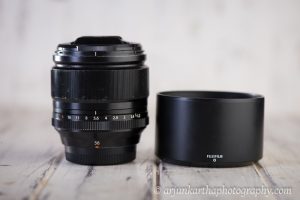 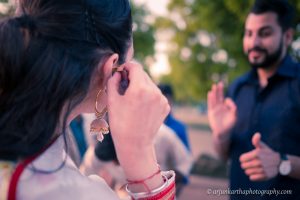 Both the lenses give a fantastic bokeh. The backgrounds remain soft and smooth while the subject pops out in crisp sharpness. While I expected this with wide open lenses, the quality of the bokeh is extremely pleasing (or creamy, as we sometimes like to call it!)

A pain in the neck with shooting wide open is that you sacrifice sharpness for bokeh. Not the case with the Fuji lenses – I was pleasantly surprised to note that the images were extremely sharp even with the aperture opened all the way. Wow!

The lenses feel very well made (and not plastic-y, as a lot of other manufacturers make their lenses). They feel solid and metallic, and the focus and aperture rings move with purpose and intent. Overall good-to-touch and good-to-look at, no complaints here. 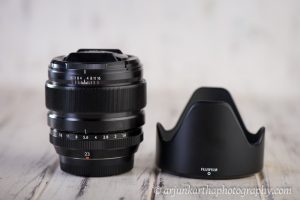 Here are a few more images from Prateek and Sandy’s session: 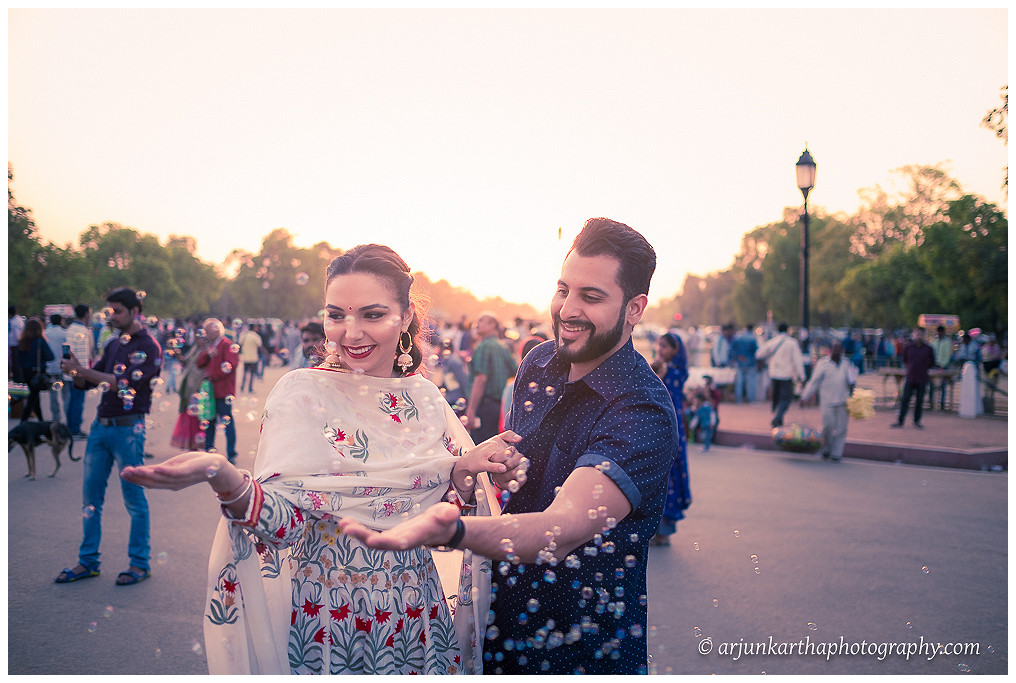 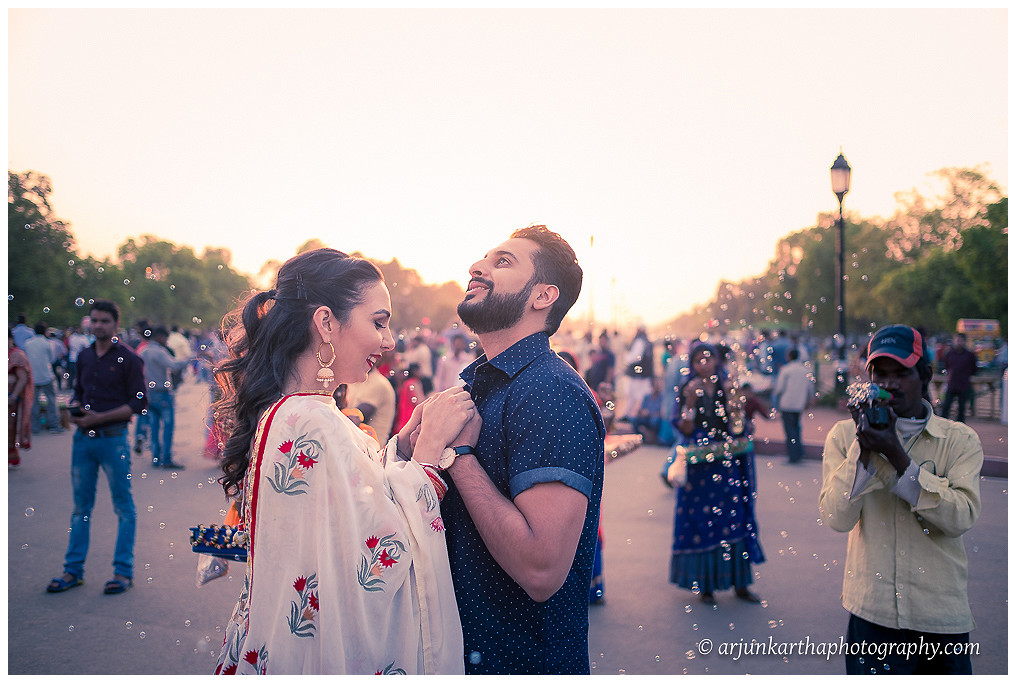 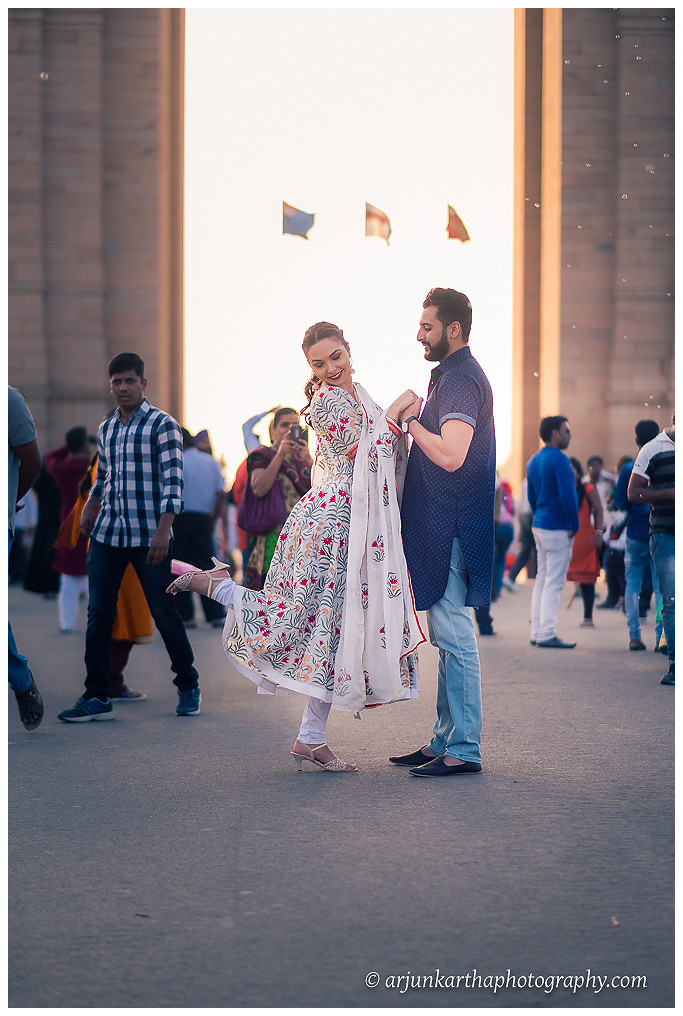 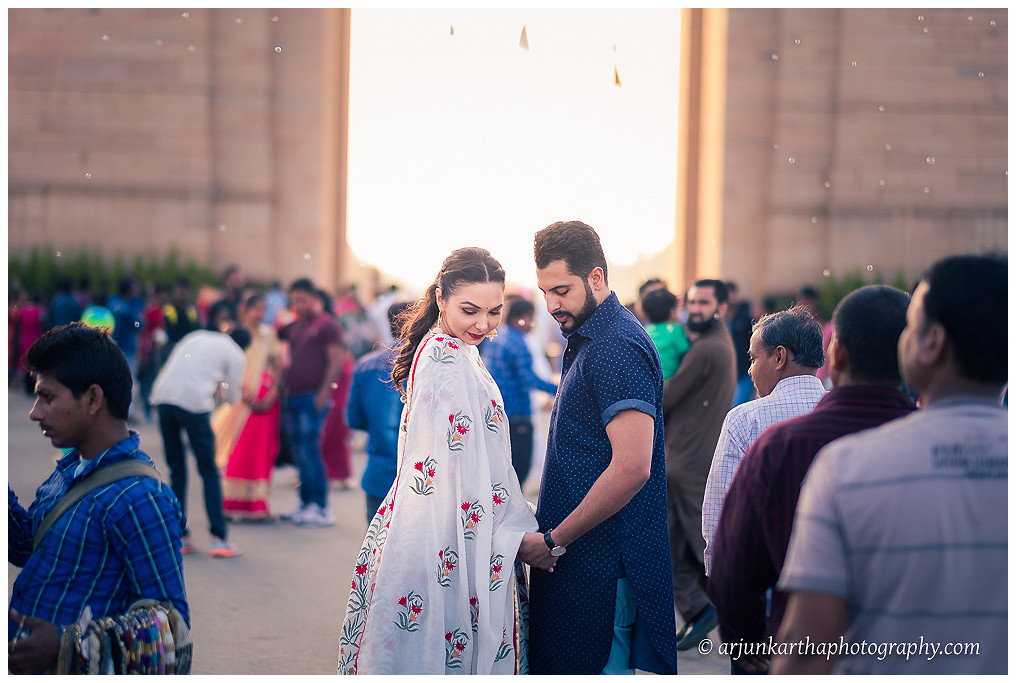 Mirrorless cameras have come a LONG way from where they were when they were first introduced. My usual working camera is a Nikon D5 which weighs at least two or three times more than the Fuji (and it feels like more when you’ve been holding it all day). Without a doubt the lighter system helps reduce fatigue and tiredness after a long day’s shoot. I started using the Fuji not knowing whether I would get the images I wanted, and whether the camera would keep up with my style of shooting – I am very glad to say that the camera performed flawlessly. The Fuji lenses are built to mate with the camera perfectly, and were extremely sharp even while shooting wide open. Am I going to shift to a mirrorless camera permanently? Time will tell – but I know that I’m going to keep this in my kit for the foreseeable future as a standby or alternate body.

Questions? I’ll be happy to answer them – ask away in the comments below!

(The Fuji X-Pro2 and all the lenses were sent to us by the kind folks at Fuji India. Thank you!)