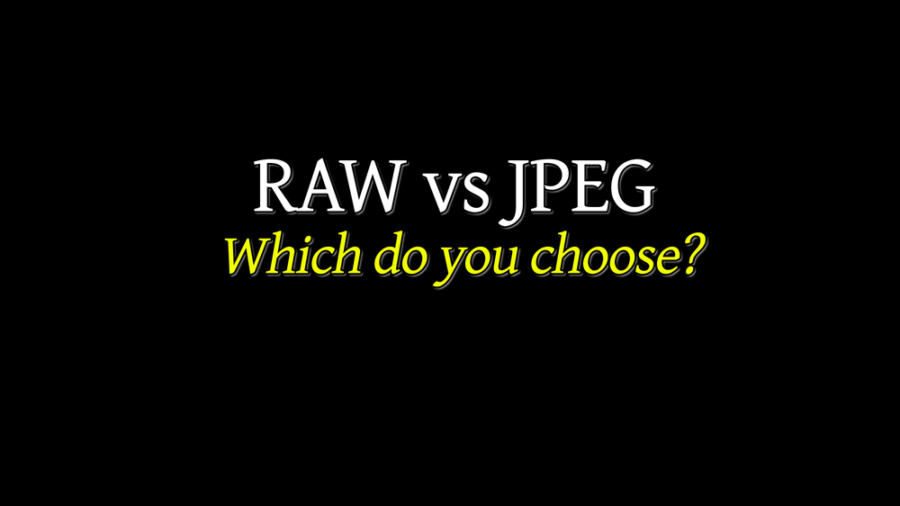 Should I shoot in RAW or JPEG?

If you’re starting out with digital photography, and are the proud owner of a new DSLR – chances are that you’ve been advised by well wishers that shooting in RAW is the way to go! This is generally sound advice – but at the end of the day, it’s a decision you should take after understanding what RAW files really are. If you’re wondering which situations require which mode; whether you’ll get different results if you shoot in JPEG and not in RAW & vice-versa and generally what the big deal is… read on!

A digital camera uses an array of millions of tiny light cavities to record an image. When you press your camera’s shutter button and the exposure begins, each of these is uncovered to collect and store light signals. This is called the camera sensor – and is the electronic version of film. To complicate things, manufacturers usually sell two types of camera sensors: a full frame sensor, which is the equivalent to 35mm film – and a cropped version of this sensor which is usually 70% or so smaller. How is a JPEG File and RAW file made??

In todays era, everything is digital and so are the cameras. In the earlier days the cameras used to work on film, which were exposed by lights and the image used to be processed in a photo lab / dark room. Now with the advancements we now have the ‘sensor’ in the camera instead of a film which basically records light (the image we capture) and stores it in the memory card.

When you set the camera to shoot on RAW, the image you capture goes through the processor of the camera and is ‘STORED AS IT IS’ in the memory card. Which means, this is a direct dump of all the pixel data from the sensor – straight to the memory card, ready for processing on the computer later on. In JPEG however – the camera does the processing. The camera automatically processes the RAW data based on hundreds of algorithms developed by camera manufacturers which are stored in the camera memory. Once the little computer inside the camera has selected the best algorithm, it keeps the information it needs and deletes the rest. 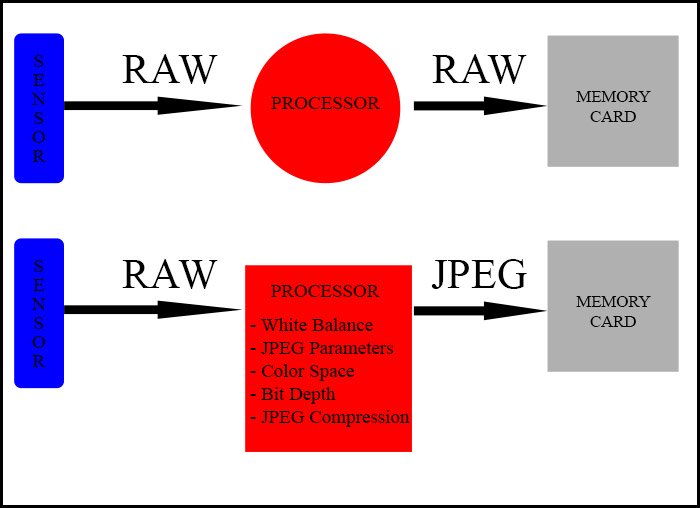 What exactly is RAW?
Raw itself means ‘fresh’, ‘uncooked’ , ‘in a natural state’ and in the photographic terms it means the SAME, which is, the image clicked in the camera is not at all processed within the camera, but saved as it is.

What exactly is a JPEG?

The term stands for “Joint Photographic Experts Group,” because that is the name of the committee that developed this format. The JPEG format was developed as the “ideal” standard for images that are both light (have less size) and have an optimal quality. From our perspective as a photographer:

There’s nothing better than an examples. Notice how the RAW files look so much duller when compared with JPEGs!

Examples of RAW Vs JPEG Images

These images are SOOC (a lovely acronym for Straight Out of the Camera). No processing done, except saved them for web use. 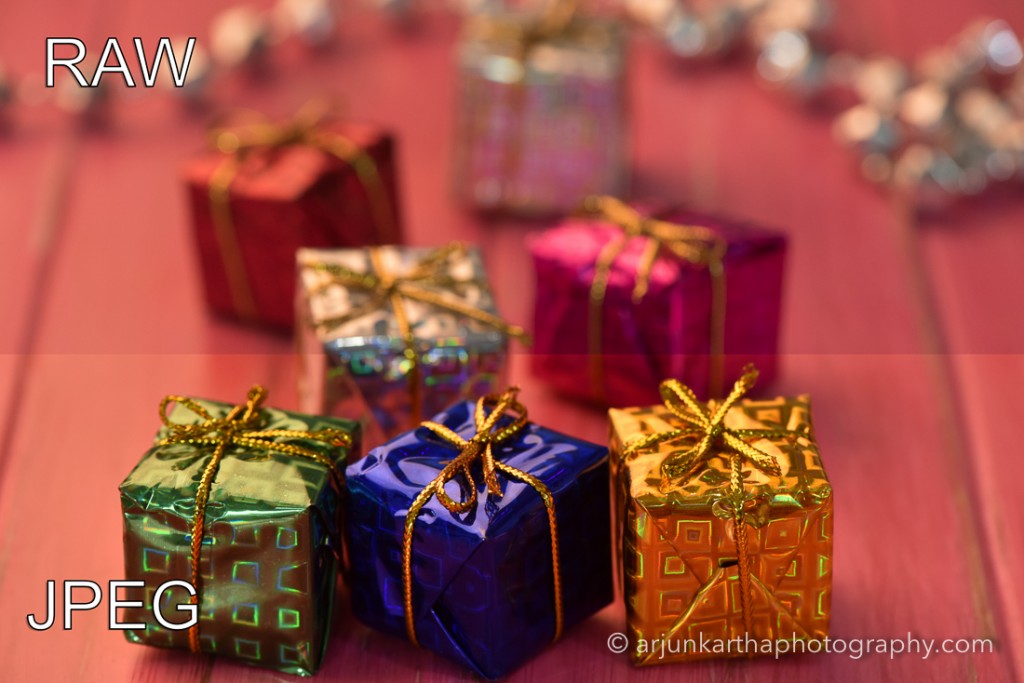 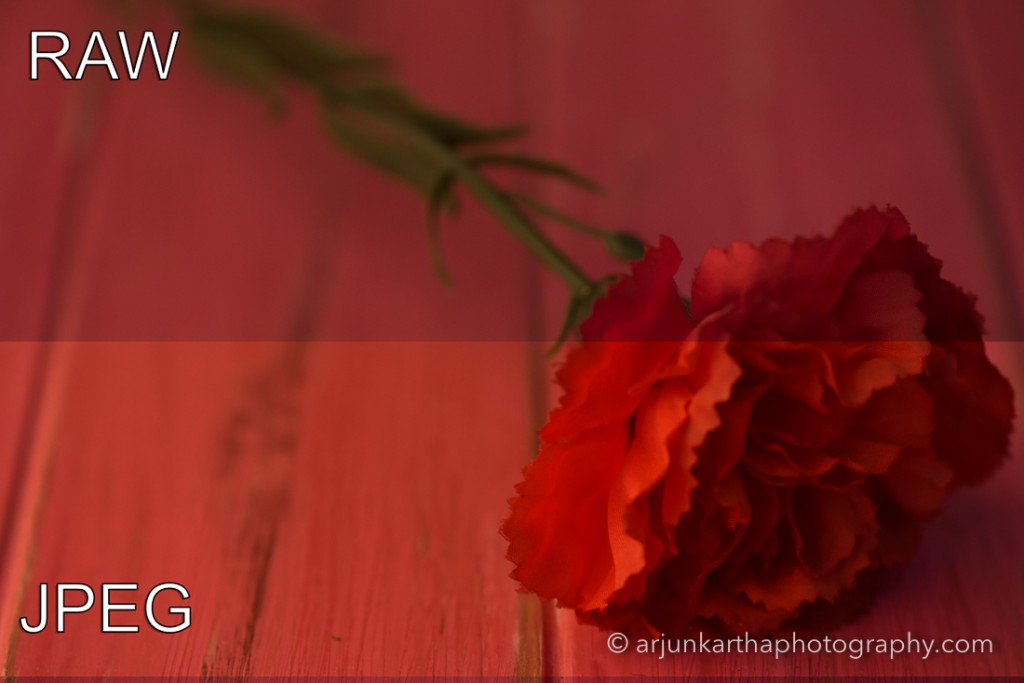 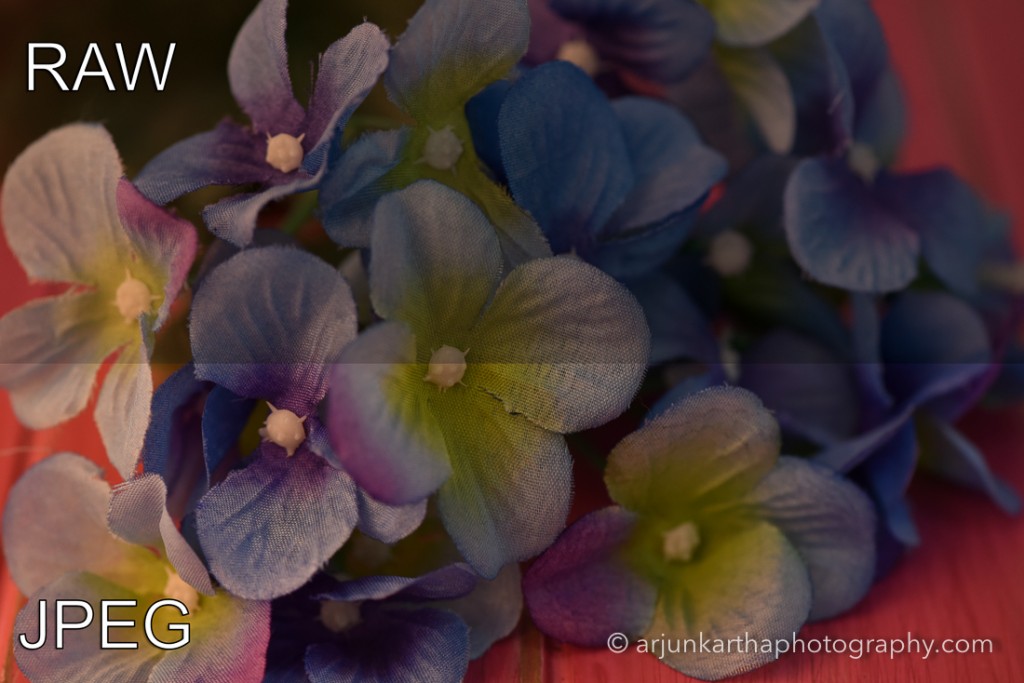 So why shoot RAW anyway?

So if JPEG looks so good, why should we shoot in RAW anyway? The thing is – as a professional photographer, I don’t want my camera to do my thinking for me. I prefer to have full control over how I process an image, and not let the camera decide. Also, when I’m shooting in challenging and tricky light, it’s so much better to have more to work with. As the JPEG doesn’t contain any of the original sensor data, there’s very little you can do to recover an image, in case you make a mistake.

To demonstrate, here’s a little experiment. We deliberately underexposed a shot by 5 stops, and shot it in both RAW and JPEG. Let’s see how they compare when we try and bump up the exposure in Lightroom. 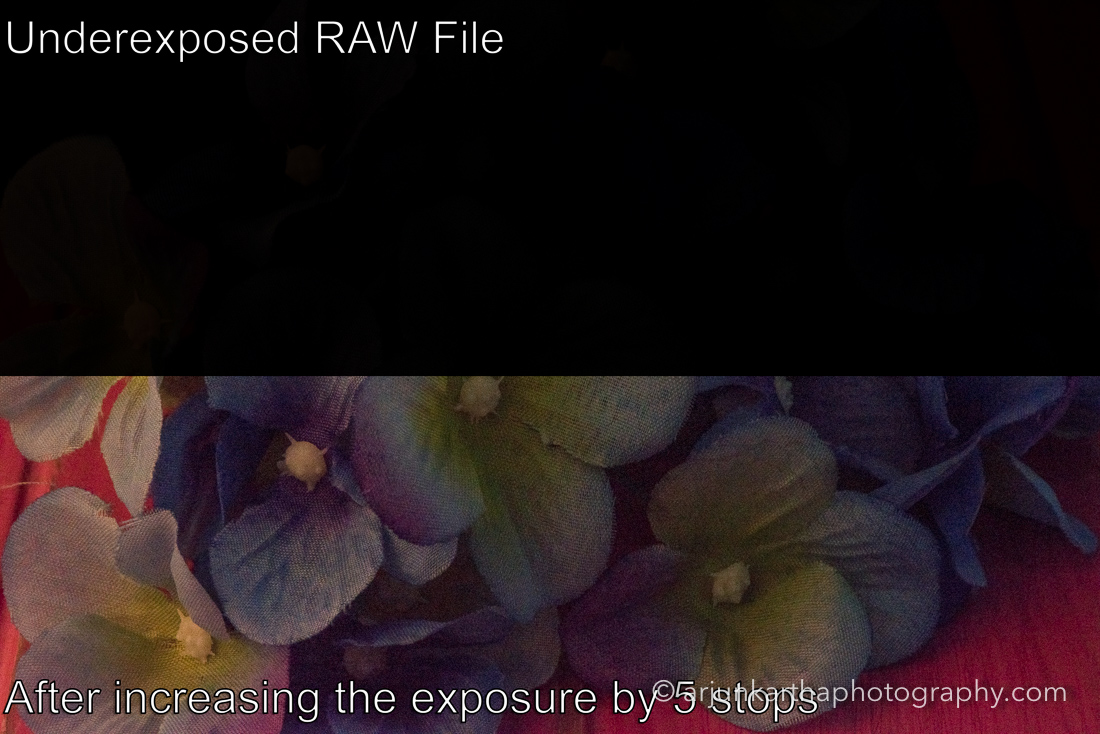 Now let’s put these together and compare them. As you can see, the amount of detail we can bring out from the RAW file (even though it was BLACK and completely underexposed) is astonishing. This is an extreme example, but you can imagine how much more flexibility you can keep when editing in RAW.

So, should I always shoot in RAW?

Not necessarily! I’d advise shooting in RAW if you’re doing professional work – you need a lot of memory cards, and ultimately it takes up a lot of space on your computer. Vacation pictures, photos you make on the move and anything else that you don’t consider critical – JPEG is the way to go!

Enjoy Shooting 🙂 Questions? Ask away below!