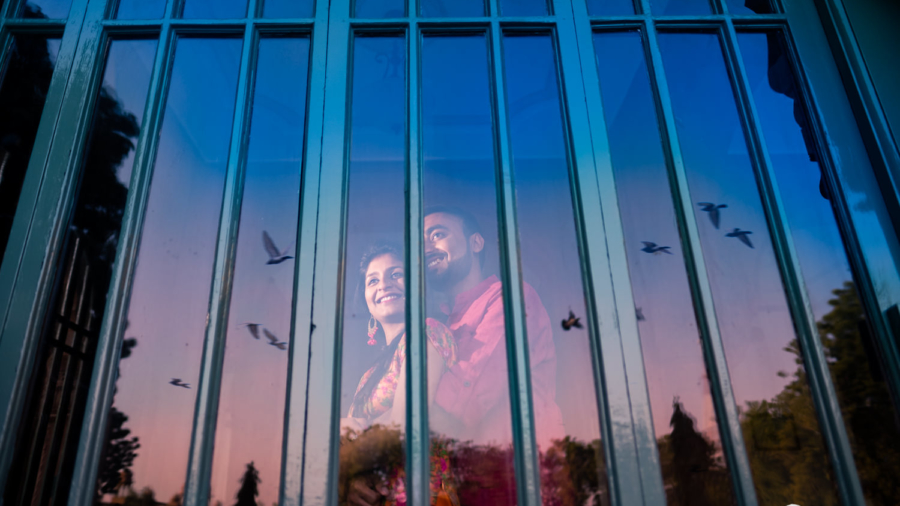 Nupur and Akshay had a grand destination wedding in Bikaner surrounded by friends and family amidst a lot of dancing and fanfare.

When Nupur first told us that she was a choreographer and a dancer, we knew this one would be special. Her laugh and vitality told us everything that we needed to know and it told the story of how and Akshay was head over heels in love with her. They married each other last year in a Bikaner destination wedding with celebrations spread across Narendra Bhawan and Laxmi Niwas Palace.

Nupur wanted to do a pre-wedding shoot in the same location as the wedding festivities. So we shot both at the Narendra Bhavan Palace and Laxmi Niwas a few months before their wedding. Nupur has such positive energy and enthusiasm that it made the whole shoot really easy for us as photographers.

The wedding celebrations began with an intimate mehendi ceremony for the bride. The guests arrived the next day and there was a larger mehendi event for both the families. Dance was a very important part of this wedding. Nupur is a choreographer and all her friends also absolutely love dancing, so there was a lot of dancing involved during every event.

Sangeet night was a riot of people, colours and dances. One of the most special things about the night was the surprise flash mob and proposal that Nupur had planned for Akshay! Later that night, Akshay surprised Nupur with a heartfelt speech and some dance performances of his own.

The haldi event was a beautiful mess! They had separate haldi ceremonies after which both the families came together for one last dance party. Not one person was spared from the haldi splashing once the pooja and main rituals were done.

The wedding took place at the Laxmi Niwas palace. Nupur made her way to Akshay hand-in-hand with her brother and the jaimala ceremony happened amidst the sparkle of fireworks around the couple.

A short teaser from their two-day wedding celebrations!

We had a lovely time at Nupur and Akshay’s wedding and wish them an amazing life together. Keep dancing guys!