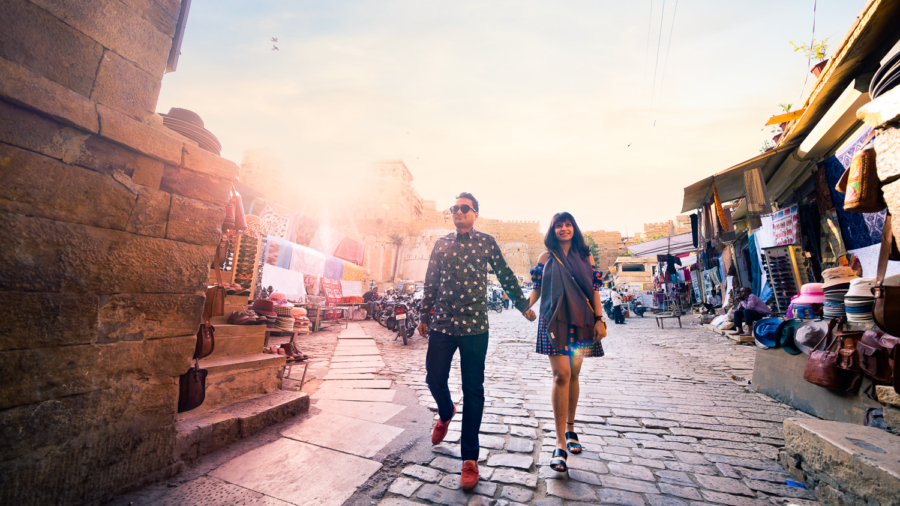 A Jaisalmer destination wedding that brought two people and families together

Srishti and Rishabh had a destination wedding in the “Golden City” of Jaisalmer last year at Jaisalmer Mariott Resort and Spa. The wedding was an intimate gathering of the closest people in Srishti and Rishabh’s lives who had come from all over the world to participate in celebrating their love and togetherness.

Before their wedding festivities began, we knew we wanted to make some pictures in the streets of Jaisalmer. We started with a few pictures is the hustle and bustle of the city.

The Jaisalmer Fort is almost a permanent fixture in most of the photos taken during the session. When you climb up to the very top of the Jaisalmer Fort, you get a lovely panoramic view of the city below. It makes you think about the fact that this is probably the very view that the kings and queens of yore witnessed every day of their lives.

The mehendi function was a casual and relaxed afternoon. The couple along with their family and friends spent their time catching up and drinking and dancing. It was a colourful and vibrant afternoon of festivities.

The sangeet night was hosted by Srishti and Rishabh’s friends. It began with a fun game organised by the couple’s friends that involved them in answering questions about each other. The rest of the night was a mixture of dance performances by the couple’s friends and family. It was also a night of speeches, a lot of their friends told stories of their college days, they spoke about how much they loved the couple, wished them the best for the new life-adventure. The partying went on until the wee hours of the morning!

The couple had separate haldi ceremonies with their families. We were amazed at their energy so early in the morning after an entire night of partying! While Rishabh’s family had fun putting loads of haldi on him, Srishti’s family added a flower shower in addition to the haldi wars.

Srishti made for a gorgeous bride in a bright yellow Sabyasachi lehenga. We loved her distinctive choice of colour in her bridal outfit. So we made sure to capture her in all her bridal glory.

Rishabh made his entrance on a vintage car while his friends and family danced around him. The baraatis were so full of energy that they didn’t want to stop dancing even after two hours! And who could blame them, bring on dhols and some Punjabi beats and we could dance for hours ourselves!

Srishti had her own baraat and danced with her family before walking down the aisle with her father. And when she walked down the stairs for her entry, she looked no less than a princess making her grand entrance!

Once the wedding festivities were done, we snuck the couple away from their families for a quick photo shoot. We wanted that lovely yellow lehenga to really pop!

All good things come to an end, and soon it was time for Srishti to say goodbye to her family. Of course, since it was a destination wedding and everyone was staying in the same hotel, the goodbyes brought her straight back to everyone!

The reception after the wedding ceremony was an amazing musical night. The two Jain families weren’t ready to leave the party yet! The evening was melodious with the music of the performer Kutle Khan. It was a night of dancing for everyone.

Sometimes, the location of a wedding is as integra

Love is eternal. It extends beyond age and time. W

Silhouette - one of our favourite photography tech