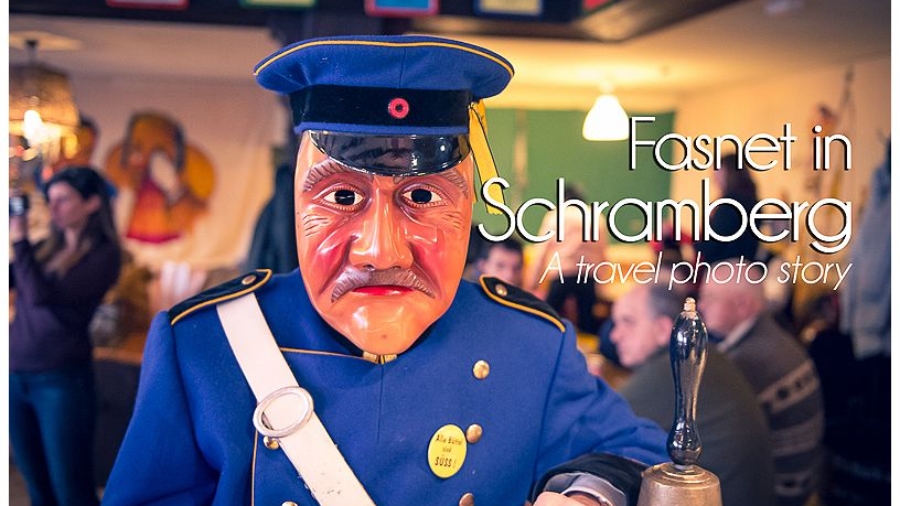 (Note, this is a post about Fasnet in Schramberg only. I went from town to town in the Black Forest area in Germany to experience Fasnet first hand – if you’ve landed on this article, you should start HERE).

Schramberg is a lovely little town in the Black Forest area, around 25km from the city of Rottweil. I landed here during the start of the Fasnet celebrations, and was totally blown away by the way the entire town (and people from adjoining areas, I’m certain) had turned up in full costumes for the parade. (I’ve been given to understand that the full parade had more than a THOUSAND people in full costume!). One of the highlights of the Fasnet carnival here are the Bach-Na-Fahrer (or tub riders) who float along the city’s stream in tiny wooden tubs!

We started with a meal in the lovely Braustube Schraivogel tavern – where a number of local carnival participants had gathered for an afternoon of food, beer and fun! 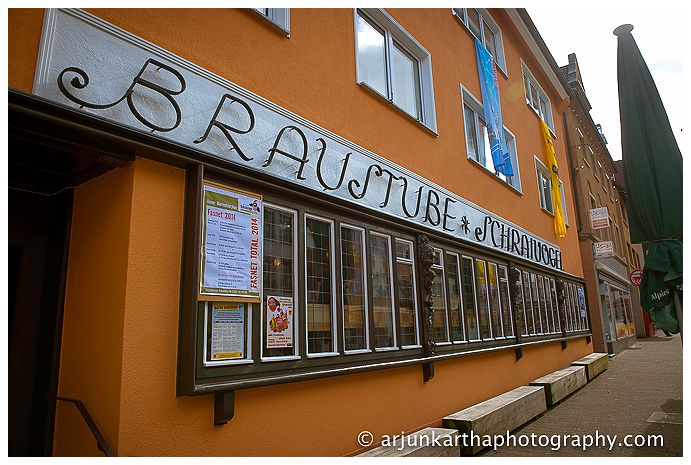 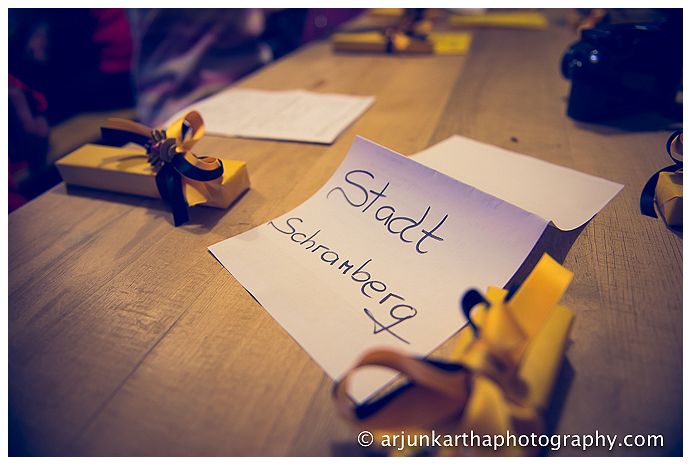 Lovely little gifts from our guide in Schramberg!

Something I was certainly looking forward to from my time in Germany was the beer, and of course – the sausages. I’ve always known that each town (or district) in Germany is known for the style of beer they produce, and I was determined to try it all. 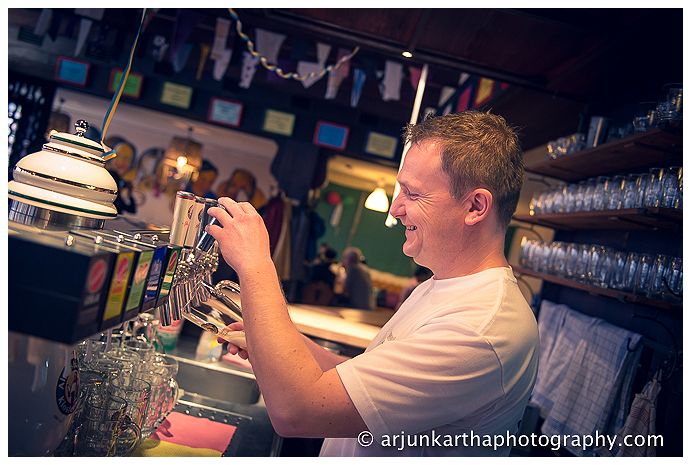 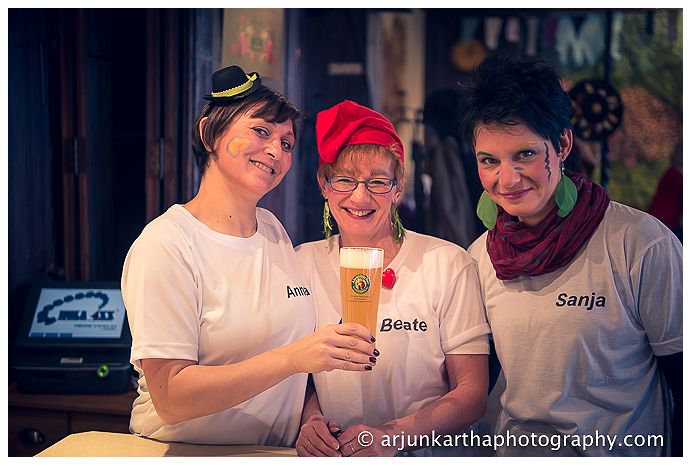 Yes, and they were happy to pose with it too! 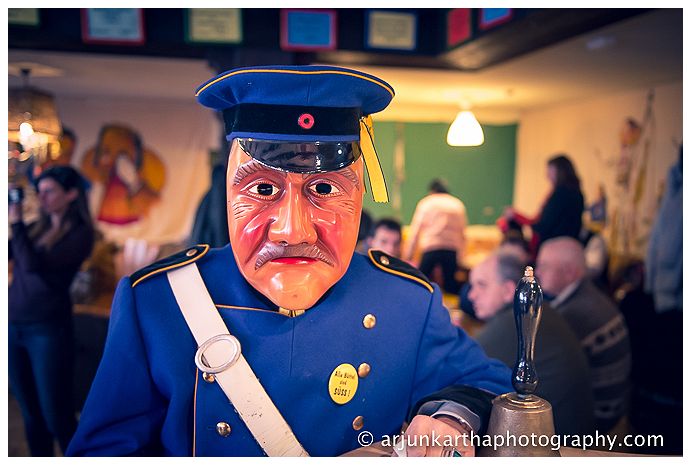 I met all sorts of colourful characters at the bar – it really was a fun meal! 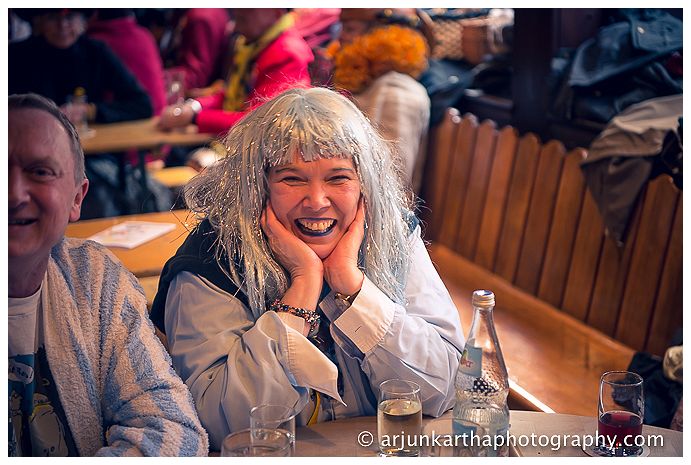 After we were nicely fed and in a jolly good mood, it was time to start our Fasnet experience. The crowds had just started to gather – and this was a great time to walk around the crowd admiring the costumes. India has an amazing number of festivals – but for some reason, not many of these involve costumes and dressing up, so I really feel that’s something that our cultural road map missed out on. These costumes were remarkable – and something that the owners had put a lot of work in. 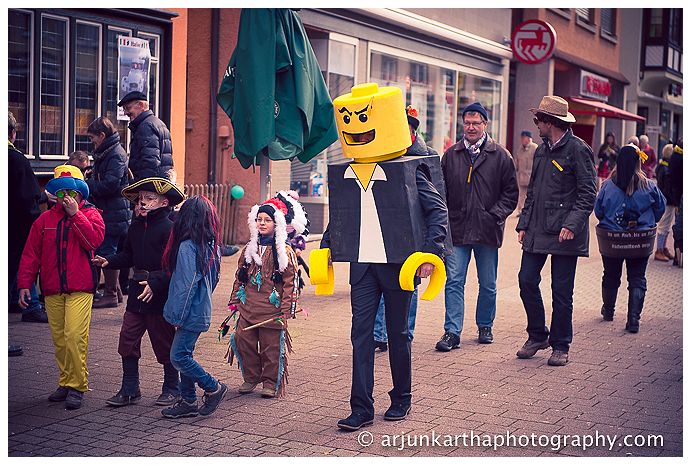 It’s not just the participants in the parades who dressed up! 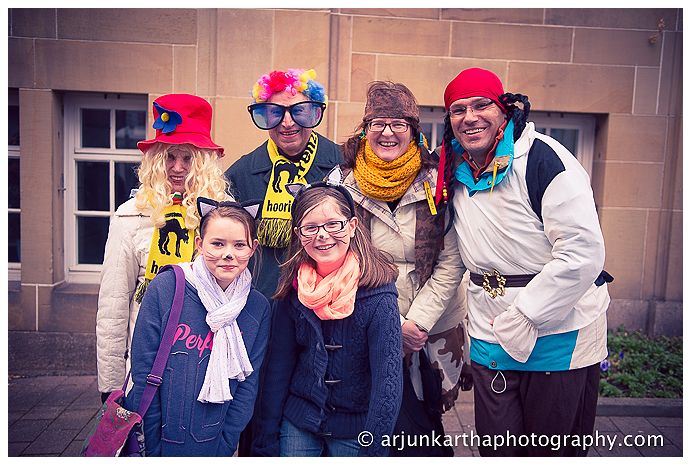 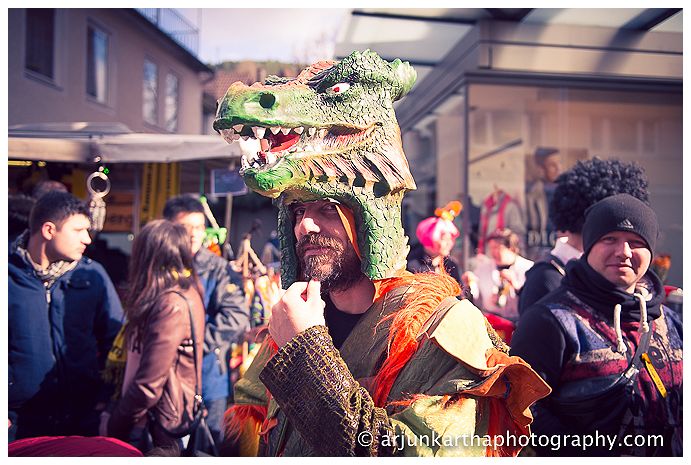 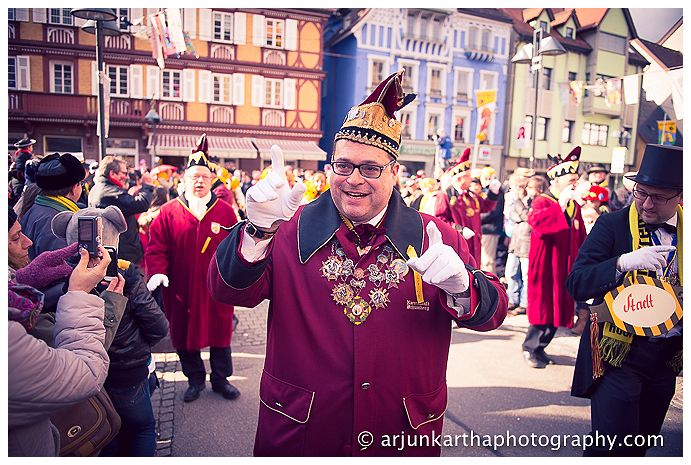 Even the town’s mayor and other public officials were out on the streets!

One of the highlights of the parade – we were told – was the “pretzel blessing” – where some 25,000 pretzels (yes, you read that right!) are shared among the crowd. Children were going wild – these Hanselpretzels really had to be eaten to be believed! The key to getting one was the correct Fasnet greeting – which I bungled thoroughly, but one of the costumed characters was kind enough to give it to me anyway! 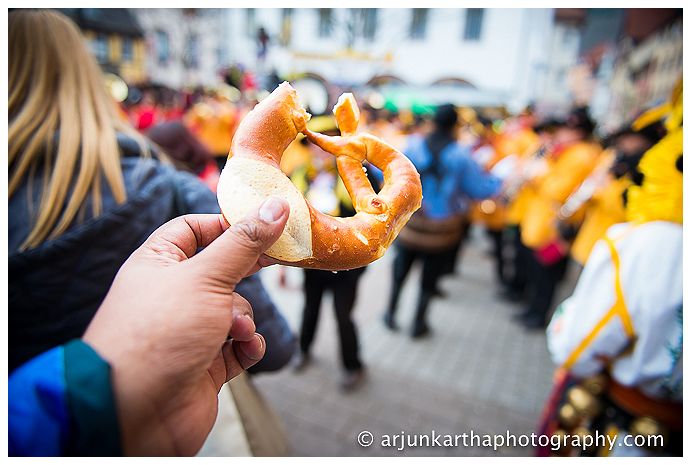 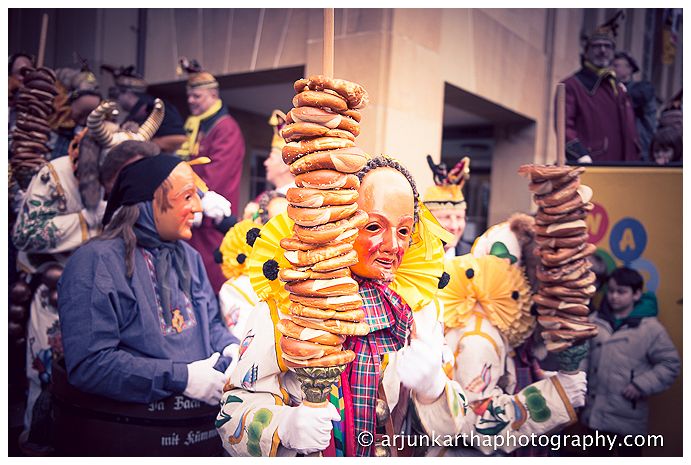 Stacks and stacks of warm pretzels ready for distribution! Members of the town administration joining in the fun

Overall, there are some 1200 costume wearers in Schramberg. Most of them have received the “Hansel accolade” and are thus members of the Hansel guild. The guild places great value on continuing the tradition of the outward appearance of the fools. The tradition committee checks every mask and costume to see whether it complies with the handed down and prescribed characteristics of the guild. This is intended to uphold tradition and ensure the typical characteristics of the Schramberg costumes.

Some of the main costumes to look out for in Schramberg during the carnival are: 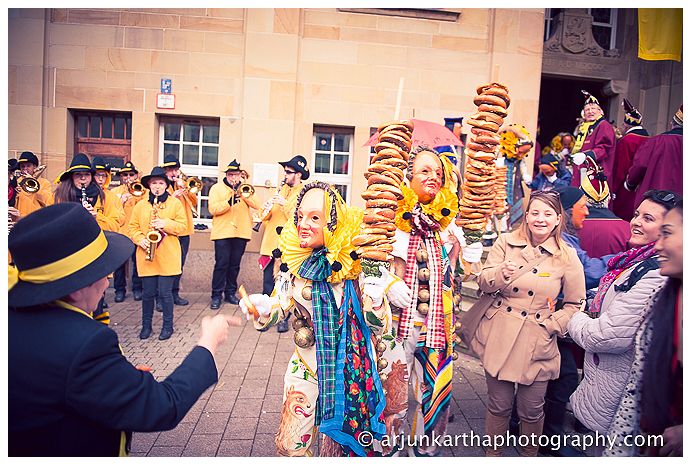 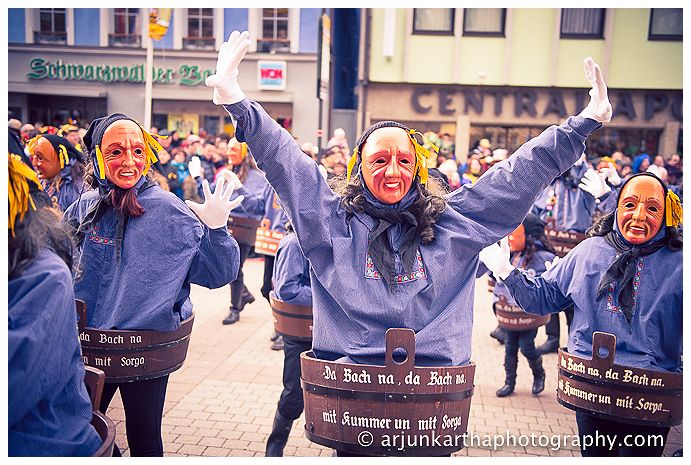 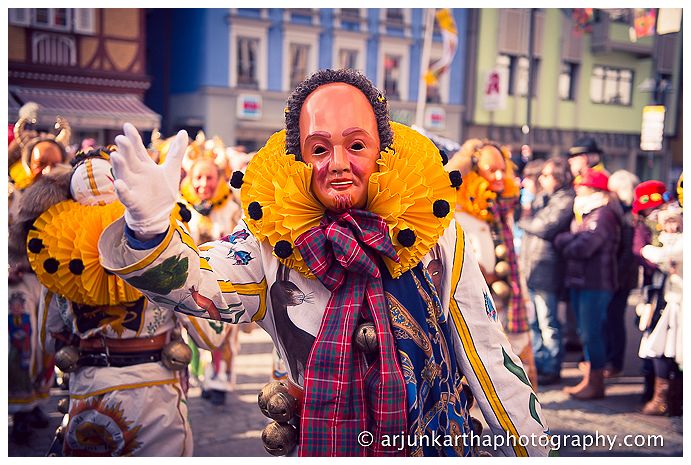 Overall, Schramberg is a great place to soak in the Fasnet experience. The townspeople are warm and friendly, and there’s plenty to see. If you find yourself with more time on your hands, you could even check out the Castle Ruins of the Hohenschramberg or a walk in the Black Forest.

I stayed at the Hotel Baren in Rottweil – which is a short drive away. It’s a great place to stay – but if you prefer to stay in Schramberg, there are plenty of places to stay. Read my full post on Rottweil to know more about Fasnet there, and about the Hotel Baren. 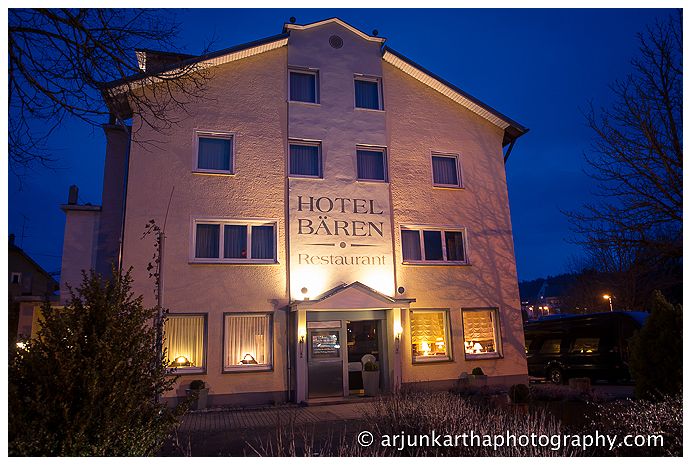 The Hotel Baren – read my full post on Fasnet in Rottweil here to know more!